Hello, to all those reading this.

If you’ve subscribed to this blog, I’m thankful, for the support and for the unwavering patience. I find that both come hard in the world we live today.

Speaking of today, yours truly has embarked on a new journey. Instagram is an app we’ve all come to use and love, I thought it would only be appropriate I shift to it, as my main means of writing.

It’s a shame I couldn’t carry on this blog for more than a year. Actual dates will tell you the period was greater than that. But it’s only right a blog should be more regular, more consistent.

And so you’ve the shift to Instagram. I hope you guys will support me there, just as you did me here. 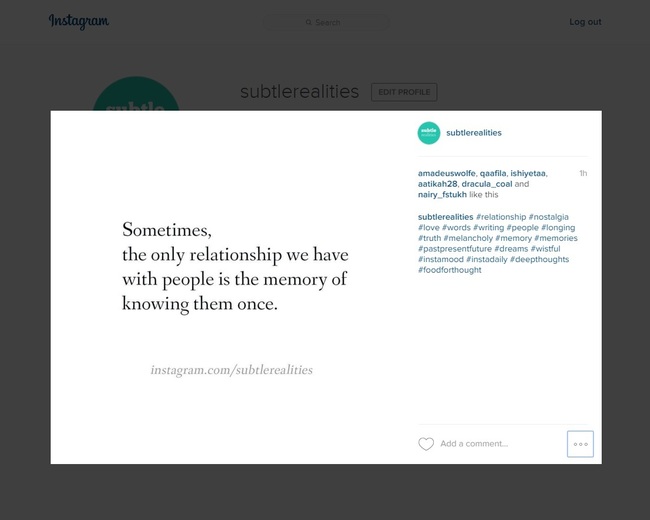 He woke up at six in the morning. Rushing into the bathroom, he showered and dressed in haste, he dread the thought of missing his train. He skipped breakfast at home, he used to pack the previous night’s leftovers in a bag and eat it on his way to office.

He worked from eight to five, and more often than not, he used to work overtime. His social life was not a happening one, he seldom got time to engage with friends. He was a bachelor, he wanted to get married but he was doing little about it. Other than placing his profile on the dating and matrimonial apps, nothing else.

He was returning home, watching a movie on his smartphone. He didn’t notice nor did he respond to a lady who asked him to make some space for her to sit. After the old man next to him tugged at his sleeve, he shifted a bit, squeezing himself between the two.

His movie came to an end, he pressed...

It was dark as night.

You could look upwards, to see everything and to feel nothing. Such was the power, such was the responsibility.

The time had come for it to begin again.

In a voice loud and clear, it spoke:

“Let there be light!”

He couldn’t see the world like he used to. Something felt unreal.
No, he hadn’t lost any of his sense. He was in perfect health. The only thing amiss was his mobile. He had lost it a day back.

He knew it would be a week before he could buy a new one. He didn’t have a spare. Moving on with life without his constant companion made him feel vulnerable. He felt as if a part of his arm had been cut off.

Walking back home was a new experience. Without his headphones, he could actually hear people speaking. He felt the throngs of people around him, the cars rushing through the lanes, the sounds of the evening prayer. The monotony of the music player was replaced by something entirely different.

He felt like a kid who had stumbled in a new land.

He wished to capture this world, the sights, the smell and the sound of it all. He had walked past it numerous times but he had...

“What you’re saying sounds absolutely crazy to me.”

“Well, that’s in line with the subject, no?”

“Okay, I’ll try again. But hold on, before that. There’s this old paradox you should hear. If a tree falls in the forest and no one is around to hear it, does it make a sound??”

“Of course it does. Our lack of observation doesn’t negates a fundamental reality.”

“Yeah, true and false. So let’s expand on this a bit. Let’s co-relate this with love.”

“Yes. You know, you are never sure, if you’re in it or if you wish to be. Are things actually shaping up or is it just a wistful heart making it up?”

“It’s incomplete without the other. That is, the one you love, you need them to complete it. Love is never a one-sided affair.”

“Coming! You took your time but you returned!”

“You’re acting as if you’re shocked. Like you didn’t know.”

“I had my misgivings, yes. But my love, more than the wisdom I perceive I’ve acquired all these years told me that I would see you again and very soon too.”

“But why? I had the wish to see the entire world, to explore and feel it in its entirety.”

“But you didn’t. You explored a part of the world and in it, you found the whole.”

“Yes. Just like a fish in a pond, which can wish all its life to move to the seas, only to realize that the seas contain only a part of the wonder. And that the same could be found in the pond too.”

“There’s this Zen thing, that if you’re willing to go around the world in search of one, a teacher will emerge next door.”

As the years went by, the one thing that kept pace with his age was the amount of regret he collected. No, he was not a failed man with broken dreams, he was an energetic family man who had found both love and happiness in his married life. The pay check was good, so were his kids and neighbors.

And yet, he felt at a loss.

As a young man, he had vowed to travel and explore, to live and relive, to learn and engage with his environment. With time, his priorities changed, and so did the face of his life.

He wished he was a hermit, a monk who could spend his days detached from the rest, away from all forms of sufferings. The thought of a free and trouble-free mind filled him with envy. If only he had been wiser earlier in his life, he wouldn’t be presently wounded down to an armchair, working even after coming home.

The laughter of his children broke his reverie. Just...

All That Can Happen

A man jumped from the terrace, right onto the ground. Passerby’s were flabbergasted, but soon they had rushed towards him. He opened his eyes, and before he could get the words out of his mouth, the life went out of him.

But the King was a just ruler, choosing to dispense justice as early as possible. For justice delayed was justice denied, something he was averse to doing. He was a popular ruler, but within his own court there was a plan scheming against him.

He was the best athlete, the joy and pride of the country. His records were not his own alone. And finally the day had come when his life, personal and professional would be made known to them all.

The zombies were an adept species, one that had scared the child for a very long time. Just as he was turning off the lights, he heard a sound coming from under his bed.

“No, it cannot kill me. Although it certainly can take me to a different world altogether.”

“See! It’s the devil in disguise. I know of a man who went in it, never to come back.”

“Exactly my point! You get drawn in it like a traveler stuck in a desert storm.”

“But that’s the case, of all the things we love and hold dear.”

“And that’s the case too, of the things we hate and fear.”

“We see what we seek, not the other way round.”

“That’s very deep, you know and it doesn’t gives me any comfort.”

“Oh, it’s not what you think it is. Only when you learn to embrace it and make it your own, you will see how the greatest of your fears can become the thing you come to love the most.”

“That’s its beauty. You see what you feel. What you fear.”

He cast a glance but true to what his...